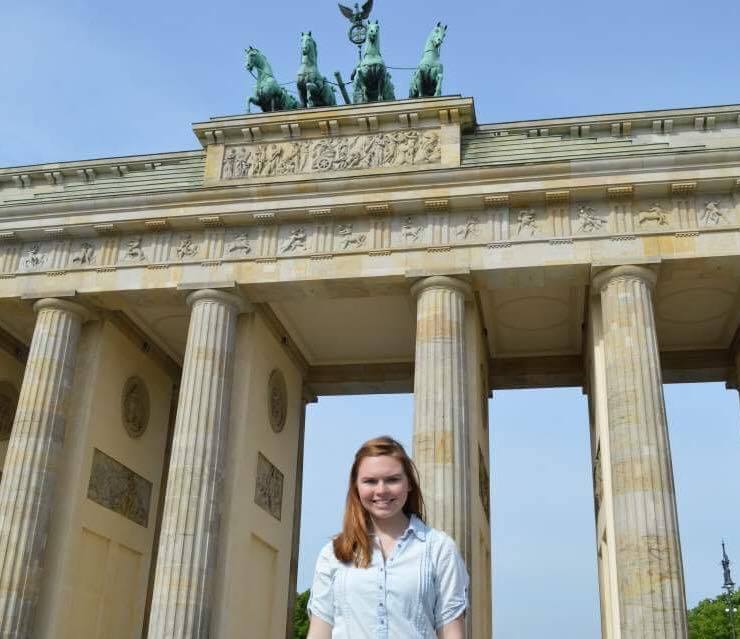 Throughout my time at Hanover, my German classes taught me new ways to think about education, political reform, and even the beauty of Expressionistic art; but, most importantly, I learned to communicate with people whose backgrounds and opinions differ from my own. Because I majored in German, I was able to travel overseas for a Spring Term trip and put into practice the oral skills I learned in the classroom. And ultimately, after graduating in 2014, I returned to Germany with a grant from the Fulbright Commission to teach English at a school in Berlin. This grant allowed me to experience first hand the German education system. At the same time, it gave me the opportunity to establish new friendships and to be a representative of American culture. While I now live and work in the United States, the abilities I developed by studying the German language and experiencing the German culture - to listen to the message behind one's words, express my thoughts intelligently, and always keep an open mind- are invaluable assets to any workplace. 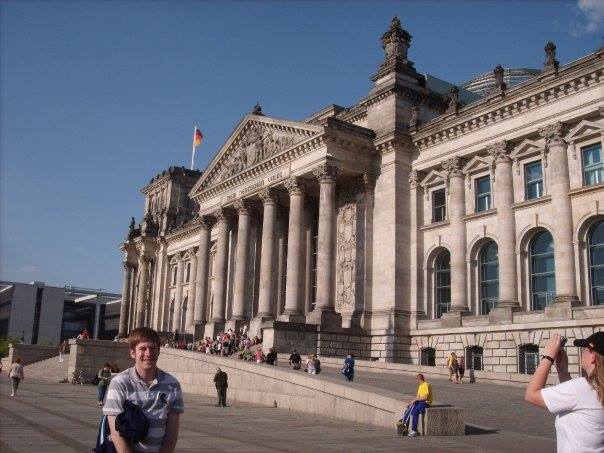 I deeply appreciated the time I spent studying German at Hanover. I took nearly enough credits to have a minor, even though there was no crossover with my music major. Through the German program, I traveled with Dr. Taylor to Germany in Spring Term 2008, directly before I graduated. The experience abroad was extraordinarily impactful to me as a person and to my worldview. In fact, my wife commented that I constantly talk about this experience, which is definitely true. I was so shaped by my trip to Germany that I desperately want to bring a class of my own to Germany for a January Term Class. By traveling to Germany, I learned that the world is a far bigger place than small towns in Indiana; my perception prior to that time was limited and poorly supported by what really goes on in the world. The experience in Germany led to me focusing heavily on a German-language topic in my dissertation, German (and Scottish) composer Eugen d'Albert. In this original research, I had to use the skills I gained through German training to translate large portions of scholarly text in two separate biographies and many periodicals. I was well equipped to succeed at this research and continue to be interested in German language subject. I am currently in my second year as a tenure-track music professor at Loras College, in Dubuque, Iowa. 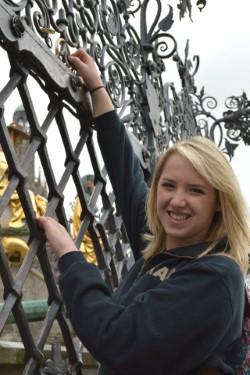 I graduated from Hanover College in 2016 with a major in Biochemistry, a minor in Theology, and a minor in German. As you can imagine it was a very busy few years! I stumbled upon German in high school and fell in love with the culture, which brought me a passion for the language. I was lucky enough during my time at Hanover to go on the spring term trip to Germany in 2014. During my time traveling across Germany with the class, I found that my German skills greatly improved from constant use. I also found I fell evermore in love with the culture! Being surrounded by the landmarks we had learned about in class made everything come to life, and I was actually able to give a brief presentation about the history of Sanssouci, the beautiful summer palace of Frederick the Great, while standing in the tiered gardens surrounding the palace! While Hanover is a wonderful community, my time in the German department served to always remind me that there is a far wider world than what lay around us. This constant reminder is part of what pushed me to look beyond the borders of what I had previously known as home to pursue graduate education. This past summer I drove the 2,300 miles from Indianapolis to the Bay Area of California, and am now pursuing a PhD in Genetics at Stanford University. The German Department at Hanover played a large part in giving me the confidence to break out of my comfort zone and venture into new territory, and for that I can't thank them enough! 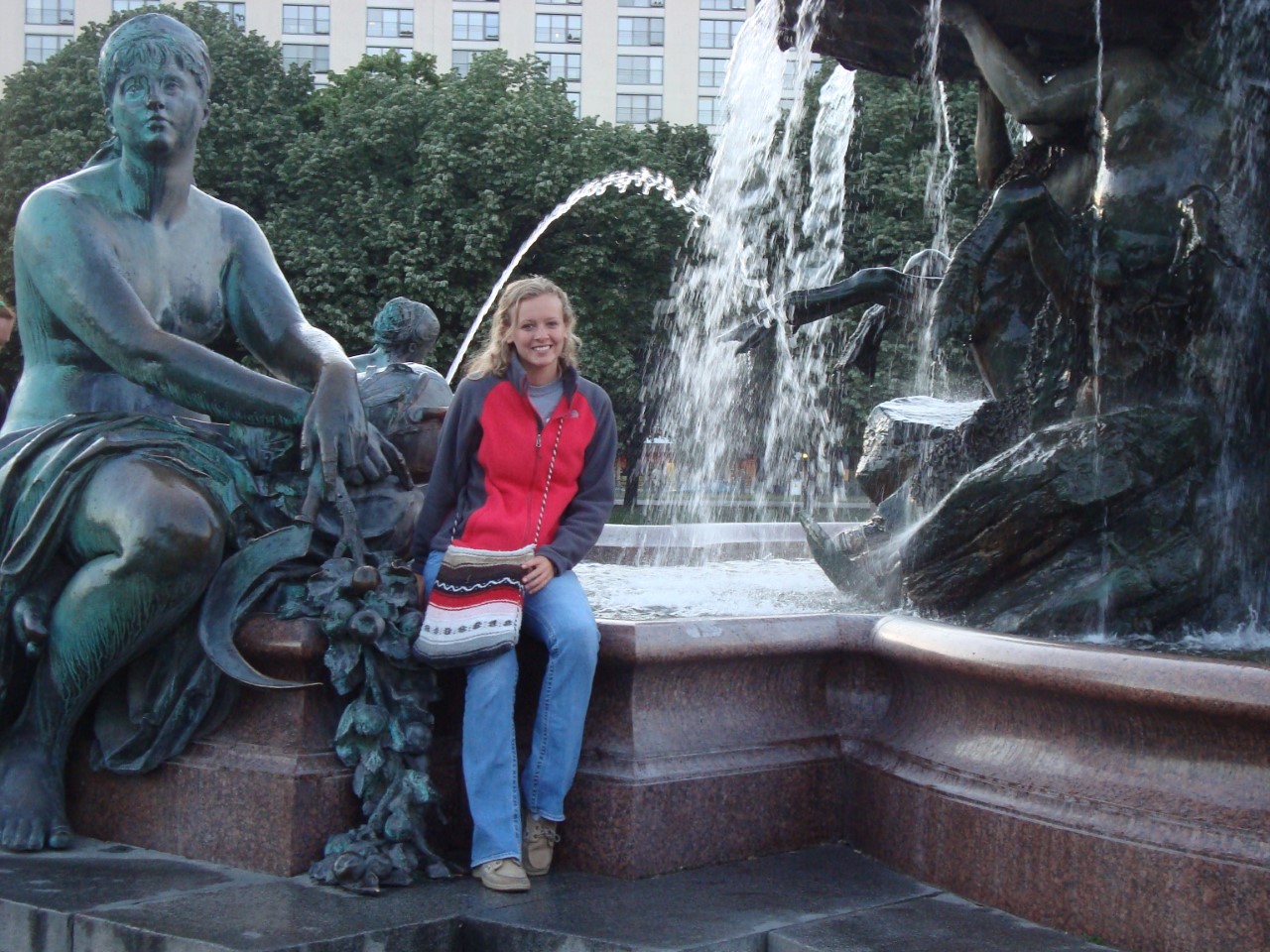 I graduated from Hanover in 2013 with a Psychology major and a German minor, I also was a Business Scholar. In Spring Term 2011, I studied abroad with Dr. Taylor where we lived in pairs or small groups with Dr. Taylor's friends on the weekends and traveled to various cities like Munich, Berlin and Dresden during the week. It was my first experience in Europe, and it really changed my perspective in a massive way. It had always been a goal of mine to become fluent in German (my family history originally sparked my interest), but I was so drawn to the culture and language, as well as the excitement of being in another country, that, after this trip, I decided to try to go back and live in Germany for a longer period of time. My connections through Hanover faculty and international students helped me establish a network that would make living and working there possible and easier! After graduation, I was a Fulbright Teaching Assistant in Nürnberg for one year and did two other internships afterwards. Now I am working full time as a social worker at a group home for unaccompanied minor refugees near Würzburg, helping them to integrate into German society. My experiences at Hanover ultimately created career opportunities for me after graduation, but they have also given me the ability to communicate and interact with people I never would have met without taking German courses at Hanover College. 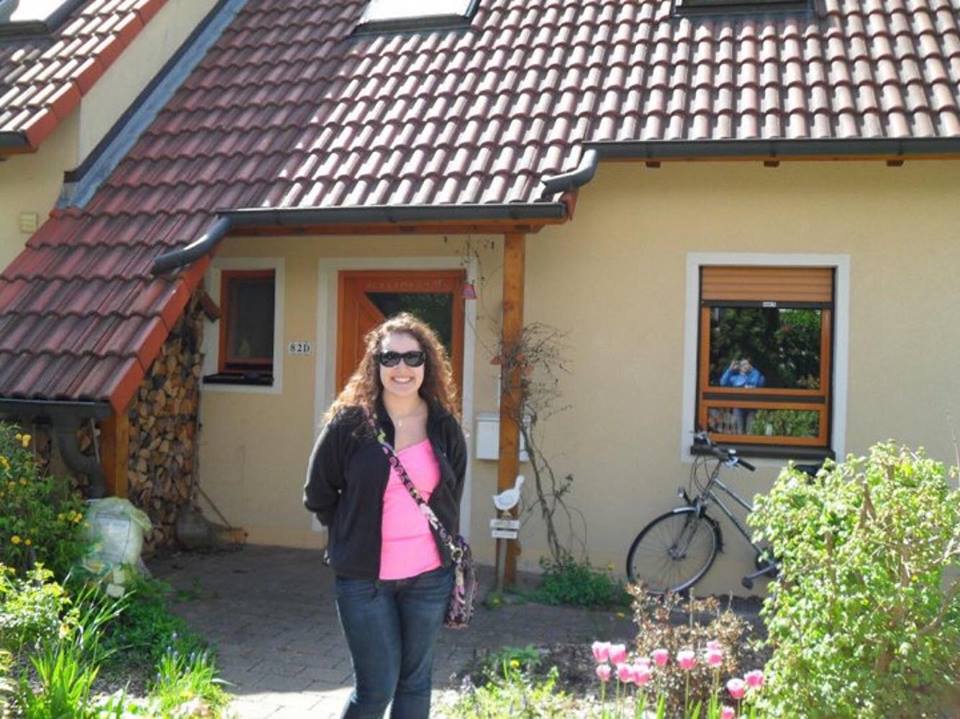 I am a 2011 Hanover graduate, and I majored in both German and Cultural Anthropology. While at Hanover, I studied abroad Spring Term during my senior year. We had the opportunity to stay with German host families, and the experience was incredible. Studying the language in the classroom is one thing, but having the chance to be immersed in the language and culture in Germany was eye opening. I learned several nuances of the German language, the traits of the German people, and I gained a lifelong appreciation for German food. I developed a second worldview by studying German language and culture, which greatly complemented my Cultural Anthropology major. Since graduating and working as a Data Analyst, I've learned from my language experience that it's imperative to cultivate another perspective for analysis and problem solving. Funnily enough, I run into the occasional German tourist or businessperson here in the Bluegrass, and they seem simultaneously bemused and excited to speak with another person who recognizes the language! 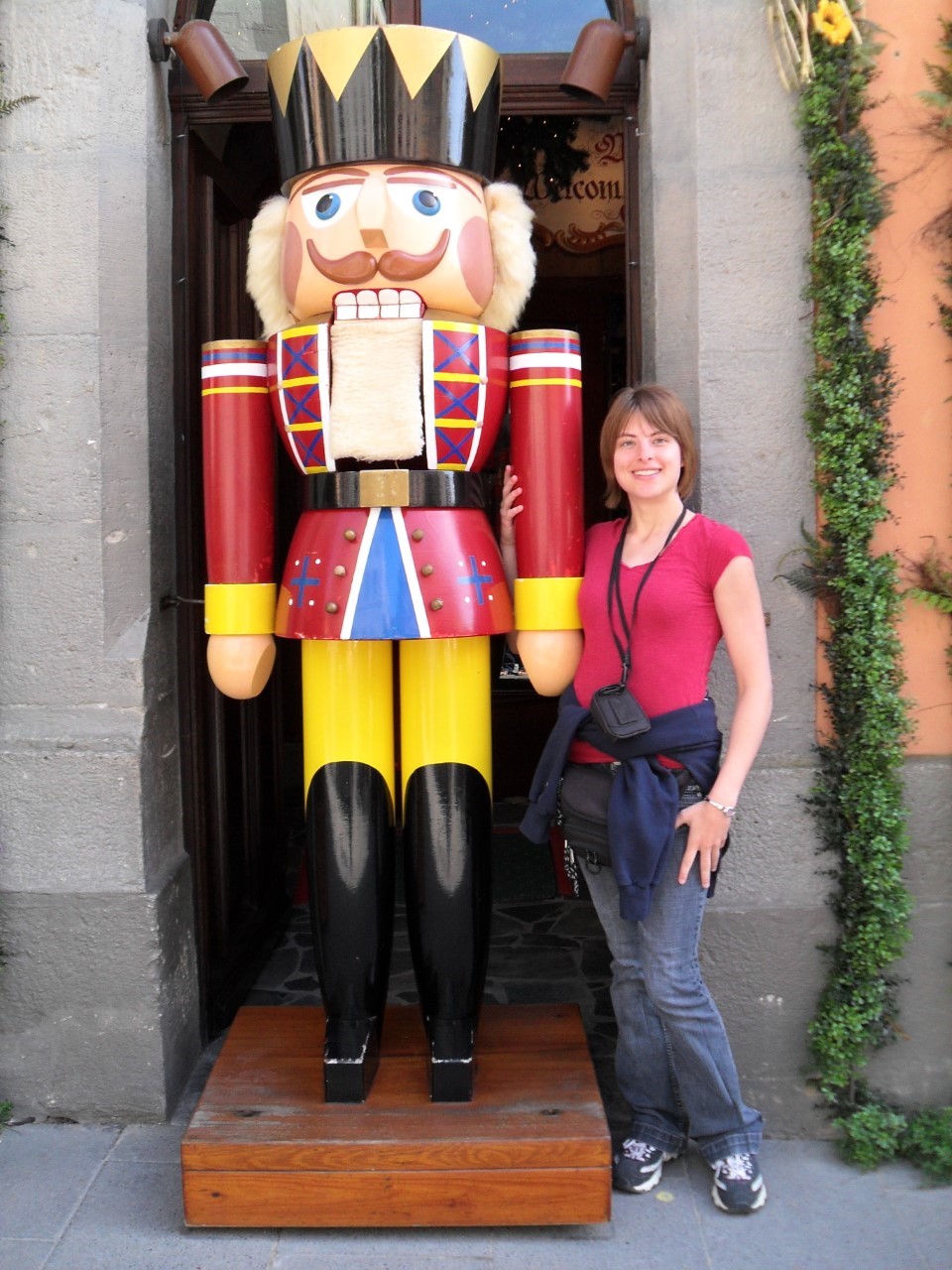 During my time at Hanover College I double majored in German and Biology. While these two majors required a lot of time and energy, it was definitely a rewarding choice. As part of the German major I was able to study abroad during Spring Term 2011 in Germany, which was an amazing experience and led me to pursue a Biology internship abroad in Austria the following summer. Thanks to my German studies while at Hanover College, I was able to comfortably settle in and feel right at home while living abroad in Austria, and knowing both German and English was incredibly helpful while I traveled to various European countries. I think it is very important to learn a second language, and my time spent at Hanover studying German was time very well spent and has greatly influenced my personal and academic growth. I graduated in 2013 and I am currently studying Art, Digital and Interactive Media at Michigan State University; I continue to keep up on my German language skills. 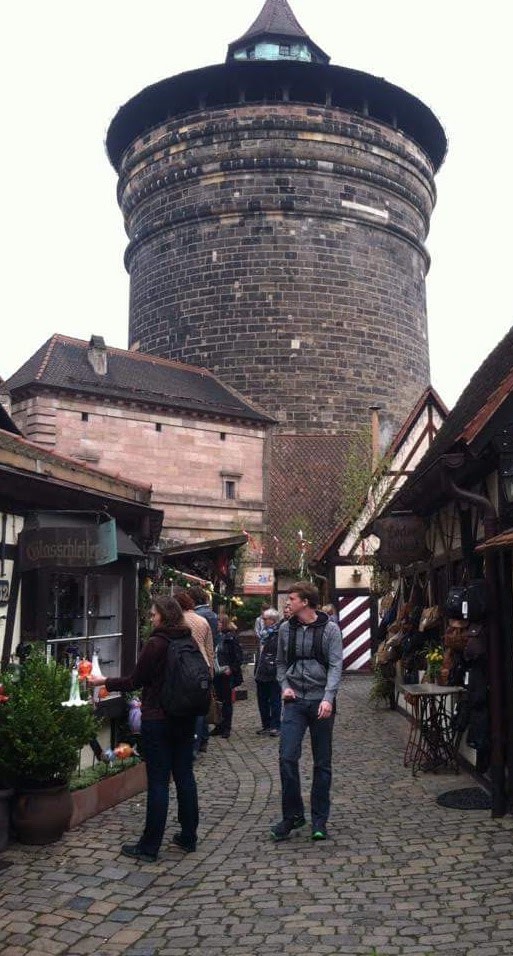 I graduated from Hanover in May of 2016 with a degree in Mathematics. I minored in German and took the Spring Term course abroad; it was a magnificent experience that I would love to do again. Studying a new language was one of the most difficult subjects for me, but it was also the most rewarding. Taking German not only let me study something that I really wanted to learn, but it also helped me have a reason to talk to a girl who would later become my fiancé. Professionally, my experience has helped set me apart in interviews from other candidates. Not many people can confidently say they know a second language, and when you study a language, you do so much more than just understand a few phrases; you learn about the culture and you show a great willingness to learn.